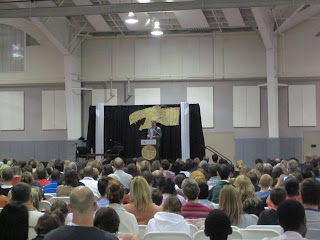 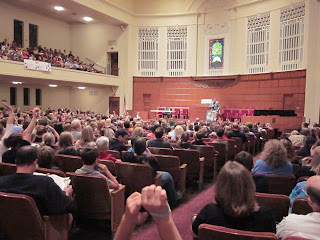 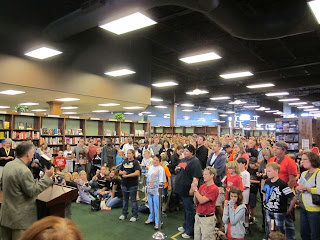 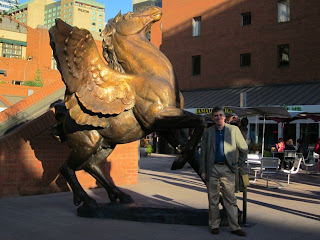 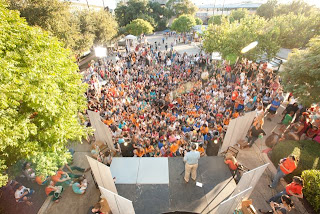 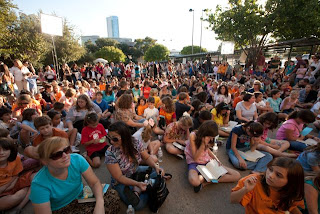 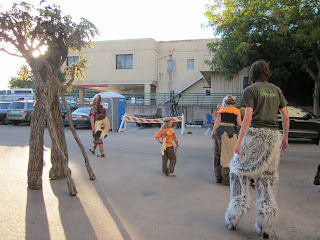 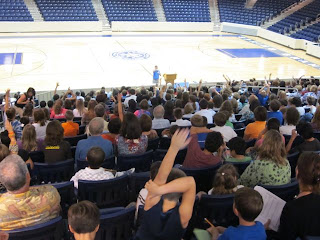 The second week of my tour begins! It’s hard to believe The Lost Hero has already been out for seven days. I’m so glad to hear all the positive feedback from the kids. I’m glad you guys are enjoying it!

Sunday I was in Phoenix for an event with Changing Hands Bookstore. We had a sell-out crowd of about 1100 in a high school auditorium and it was lots of fun. My favorite question from the audience: If the mythology is Greek in Lost Hero, why did you use Roman numbers for the chapters? Excellent observation. My answer: The Romans are coming to town . . . I know people miss the funny chapter titles. Sorry about that, but Heroes of Olympus will use alternating third-person narrators, so I thought it would be less confusing if I just used character names for titles this time around. I’ll try to keep the funny in the stories, though – no worries there.

During the signing, the audience got to watch Looney Tunes while they waited. I was jealous! Once again I saw a ton of great homemade T-shirts and other costumes. Two girls even came dressed as Leo Valdez with toolbelts – that was cool! During the trip, I also found out that Phoenix has a mountain called Mummy Mountain. Now why didn’t I realize that when I was writing The Red Pyramid? I think the Kanes may need to make another trip to Phoenix just so I can use that name. Several people asked me if I would move to Phoenix – talk about a warm welcome! While I love visiting and think the desert is beautiful, San Antonio is home for me. We’ve been settled into Zeus House for less than a year, and I think we’re going to spend at least the kids’ school years enjoying the space.

Yesterday, we flew to Salt Lake City for an event with King’s English Bookstore. It was my first event here. A gorgeous, clean city with great views, and what an enthusiastic group of booksellers. I’m not used to booksellers running up to me and yelling, “I love you!” But I was happy to be there! We had a crowd of 700-800 folks. My favorite question: Do you write better in the limelight or out of it? That one really made me think. I guess I try not to think about limelight while I’m writing. It’s just me in my office trying to come up with a good story, and when I imagine my audience, I’m just thinking of my sons and hoping they like the book. But of course I’m very conscious of all those other kids out there waiting for the next installment. That’s why I was so adamant about trying to speed my writing process and make two books a year rather than one. Favorite costume: a girl had made a Camp Half-Blood necklace with a tie-dyed necklace for the Party Ponies. That must’ve been a great summer! I also loved the picture of Piper McLean that I signed for one young artist, and the travel brochure for Percy’s world that another student had. As a teacher, I’d give it an A! I got lots of questions about Kane Chronicles 2, and don’t worry. It’s coming out in May.

Today I’m off to Portland, another one of my favorite cities. Though I’ve been there before, I’ve never done an event with Powell’s, which seems incredible since it’s such an institution. I look forward to the signing!

Above you can see some photos from the first leg of the photo. Hope you enjoy! You have to especially love the giant bronze Pegasus in Latimer Square, Denver. That has to go into a book, don’t you think? Photos of the BookPeople event are courtesy of Getty Image, all rights reserved.