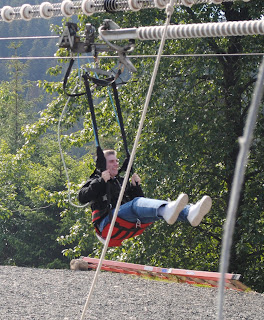 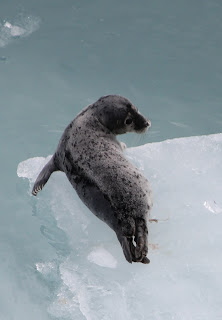 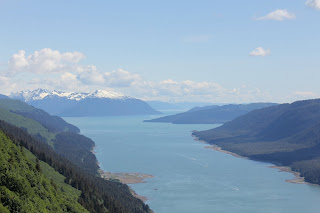 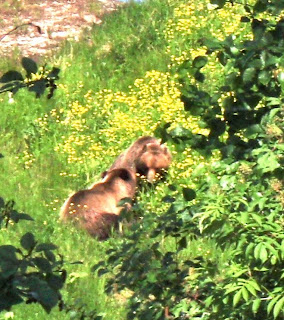 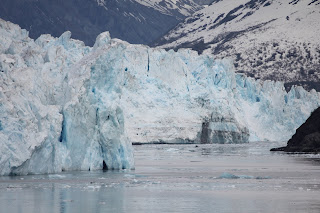 Two weeks ago, we returned from a trip to Alaska – my one true vacation this summer before diving back into writing! It was Becky’s and my 25th anniversary, so we felt entitled to a nice break. We took the family on a cruise from Seward, Alaska to Vancouver, and it was pretty amazing.

We flew into Anchorage and stayed overnight at the Captain Cook Hotel. The kids immediately decided they could live in Anchorage. They loved the mountains, the sea, and the cool weather – though I warned them it got a wee bit colder in the winter. We happened to arrive on a beautiful sunny day, which certainly helped. The sun didn’t set until almost midnight – bizarre, but fun to experience. The next day we had breakfast at the Snow City Café (highly recommended) and visited the Alaska State Museum. Mostly we relaxed, read, slept, and ate. This quickly became our pattern for the vacation. Not bad at all!

After another sunny night’s sleep, we took the early morning train from Anchorage to Seward. The scenery was so beautiful that after a while we had to stop taking pictures. It was like, “Oh, look. Another breathtaking vista.” It became sensory overload – the forests, the snowy mountains, the glacial waterfalls. You kind of had to see it to appreciate it, but we loved the ride. Two bald eagles followed our train for a while, but after a few more days we’d seen so many bald eagles that we became almost blasé about it. “They’re like Alaskan squirrels,” Haley said. “They’re everywhere.”

We arrived in Seward and had lunch at a tiny place called the Smoke Shack – again, highly recommended if you find yourself in Seward, Alaska. We discovered all kinds of great food on this trip – excellent fish and chips, halibut tacos, various burgers, and reindeer sausage. The kids started the trip with one goal: “We wanna eat Rudolph for breakfast!” And they were not disappointed. Caribou meat is yummy.

The cruise itself was seven days. We had gorgeous sunny weather the entire time, which I understand is very rare. You can see some highlights in the pictures above. At the Hubbard Glacier, we got to see seals chilling on the ice. (Sorry for the pun) In Juneau (one of the pictures shows the view from the top of Mount Juneau) we got to visit a sled dog camp and cuddle with the puppies. Haley and Patrick were worried about the sled dogs and whether or not the activity was cruel to animals. I don’t know . . . as a dog lover and dog owner, I have to say those dogs looked pretty darn happy and excited to be pulling that sled. The trainers really cared about their animals, too. The puppies were absolutely too cute.

We all agreed that our favorite day was Icy Strait Point. This port is run by the native population of Hoonah, not the cruise company, which made all the difference. They only allow one ship to dock at a time, and the dock shops feature Native American art and locally produced goods, not the cruddy tourist junk and diamond shops you often see at cruise ports. In the morning, we took the world’s longest zip line, which is over a mile long, from the top of a mountain back down to the port. It took forty-five minutes to drive up, and just under two minutes to zip down. That’s a picture of me coming in for a landing. In the afternoon, we went into the wilderness on a bear-spotting expedition and watched two brown bears – a male and female, about six hundred pounds each – relaxing in the wildflowers by a creek. So cool.

Finally the cruise ended in Vancouver. This was my second trip to the city, and it only confirmed for me what a great place it is. We visited the aquarium, strolled through the park, and explored downtown. Then we headed home and spent several days trying to get adjusted from Alaska time.

So many people had told me that Alaska cruises were awesome. I can now attest to it. Definitely worth doing!

On the trip, I got to finish six novels. What a treat to have so much reading time! Here’s my book report:

Leviathan, by Scott Westerfeld: I really enjoyed Westerfeld’s Uglies, so I was excited to read this new book, set in an alternate reality. It’s the dawn of World War I, and war is about to erupt between two great powers – the Clankers (Germany & Austro-Hungary) and the Darwinists (England, France, Russia). The Clankers are technologists with walking tanks (a la Star Wars), zeppelins and airplanes, while the Darwinists have discovered ways to manipulate DNA and create biological hybrids like floating whale ships, lizards that relay messages in English, jellyfish hot air balloons, and elephantine beasts of burden. Westerfeld’s world is beautifully realized and totally convincing. Lots of action, and two great main characters who have dangerous secrets. The whole time I was reading it, I was thinking, ‘This needs to be an online role-playing game.’ The possibilities are endless. I’ll be looking forward to the next book in this series. Check it out!

The Wind-Up Girl, by Paolo Bacigalupi: This was an adult sci fi novel, but like Leviathan, it presented a completely believable alternate reality. In this dystopian future, oil is depleted, and the world’s food supply has been devastated by biological plagues released by rival genetics companies. The new world currency is calories. Food is power. The action unfolds in Bangkok, Thailand, where a calorie man from the Midwest tries to gain access to the Thai seed bank, which might hold new DNA strands to develop disease-resistance foods. Meanwhile, a New Person (genetically modified human) Emiko, discarded by her former Japanese master, discovers that she might have more abilities than she is aware of. Several different storylines converge in a novel about revolution, intrigue, greed, and desperate survival. The survivors in Bacigalupi’s book look back at us, living in the 21st century, and express disbelief and contempt that we didn’t appreciated the bounty of food and energy we have, and didn’t do more to preserve our resources. As I said, this is an adult book with adult content, but if you like sci fi, check it out.

The Enemy, by Charlie Higson. I got to hear Charlie speak at the Disney-Hyperion dinner at BEA in New York. He said he tried to make this book as scary as possible, and would read scenes to his son, ratcheting them up until his son had trouble sleeping at night. I figured this must be worth checking out! The best description I can think of: The Enemy is The Lord of the Flies with zombies. It’s set in London after a mysterious sickness has killed off most everyone over the age of sixteen, but left some adults alive as mutated, brainless creatures who want to kill and eat the surviving children. Gruesome enough for you? Bands of children roam the streets looking for food and trying to survive. One such group has created a fortress at a supermarket, but they are out of supplies and the situation looks grim, until a mysterious messenger arrives with an invitation: Come to Buckingham Palace, and you’ll be safe. Is it a dream come true, or a trap? The novel offers tons of nail-biting action. Be aware: children die in this book, sometimes in nasty ways. The violence is not graphically portrayed, but Higson presents a dark, scary future. Different families have different comfort levels about this sort of thing, which is why I mention it, but is The Enemy a page-turner? Absolutely!

Agent Zigzag, by Ben Macintyre. I love good historical nonfiction, and Macintyre knows how to write. He tells the story of Eddie Chapman, a charming English criminal who is jailed in France during World War II, becomes a spy for the Nazis, is sent back to England and turns himself into MI5 to become a double agent for the British. The story is better than a spy novel, because it’s true, and proves the old saying that truth is stranger than fiction. Chapman goes back and forth between the British and the Nazis, playing both sides, and no one – possibly not even Chapman – is sure which side he’s on. Macintyre can pick out the humorous and the deliciously absurd details in history, and does a wonderful job bringing historical figures to full, colorful life.

Al Capone Does My Shirts, by Gennifer Choldenko. I’ve been meaning to read this for a while, and I’m glad I finally got the chance. It tells the story of 12-year-old Moose Flanagan, whose family moves to Alcatraz in the 1930s when his dad takes a job as a prison guard. The first-person narration is beautifully done. I loved the humor and the relationships between the characters. We assume Al Capone will have a role to play in the book, but it’s not clear what that role will be until the very end, when we get a Gangster ex Machina resolution. It certainly left me wanting to read the sequel, if only to see if we get more about Capone.

Blood Rites, by Jim Butcher. My guilty pleasure reading is the Harry Dresden series, featuring Chicago’s only professional wizard. Butcher has the first-person hardboiled narrator voice down pat, and throws out one-liners and rock ‘em sock ‘em action with equal abandon. Harry Dresden’s world gets increasingly complicated in this book with new allies and new enemies, and I’m glad I went back and started at the beginning of the series. This book, like the rest of the series, offers a wild ride and lots of fun.