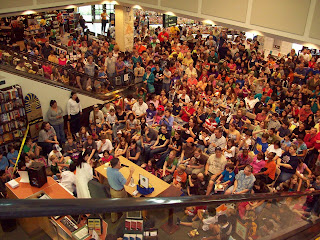 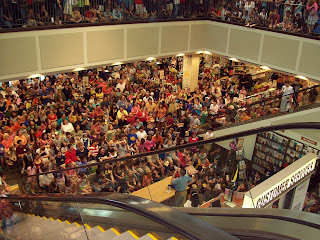 The Red Pyramid tour has officially come to a close! Thanks to everyone who came out to an event, and to the many of you who are reading the Kane Chronicles. The response from fans has been so positive — always a relief when I’ve taken a chance and tried something new. So many times in the last week I’ve heard, “When is the next Kane book?” That’s the best feedback I could ask for!

On Thursday night I had an event at Barnes & Noble Southlake, in the Dallas/Fort Worth metroplex. The store had made 1000 bracelets for the signing, which I’m told sold out in four hours. We also had several hundred more people who showed up and waited in line. Because of the massive turnout, we started the signing early and were able to get through about 1200 folks. Thanks to you all for being so patient. The local TV news came out to a short interview, and two old friends came to say hello: Ken Buley, former drummer in my college rock band (long story) who is now an MD, and Margaret Floyd, my English teacher friend formerly of Saint Mary’s Hall, and one of the earliest readers of Percy Jackson. In fact, Margaret is thanked in the acknowledgements of Lightning Thief. I remember after she read the manuscript, back in 2004, she came to my classroom and said, “This is it, Rick. This is your breakout book.” I was skeptical at the time, but she was right! Great to see my friends at the signing, and thanks to all the fans who left notes and drawings from me. After the event, a car service drove me back home to San Antonio — hooray. I got in at 1:30 AM, but it was worth it to be home.
Friday, the rain messed up our plans for a parking lot party at BookPeople in Austin, but we still had a great time inside. As usual, the staff had done an amazing job. They made an Egyptian temple on the second floor, and had magic dueling, face painting, and hieroglyph activities for the kids. Not sure how many folks came through, but it was well over 800. Thanks as always to BookPeople for an event not-to-be-missed.
And finally, yesterday, my homecoming event at La Cantera Barnes & Noble in S.A. marked the end of the tour. You can see the mass of humanity in the photos above. You can’t see it very well, but my signing table was guarded by Khufu the baboon, complete with his basketball clothes and a bag of Doritos. LOL! Thanks to my friend Caren Creech, the goddess of CRMs (community relations managers) who as usual brought Ma’at (order) out of chaos and made everything go smoothly. I’m told the staff stopped counting people at 4400. Holy Smokes! I will admit my signing hand finally started going out on me about halfway through the line, after two weeks of events, so I’m glad I can now give it a rest. When the pen starts falling out of your hand because you’re too weak to hold it anymore, it’s time for a break! Thanks to all the teachers, librarians and kids who came out, and so many parents and grandparents who stood in line for hours for kids who couldn’t be there. That is devotion, folks!
Now I’ll enjoy a quiet week at home, and it’s back to work on Kane Chronicles, book 2. My travels aren’t quite done, however. I’ll be in New York the week of May 24 for Book Expo, and will doing a 39 Clues event at Huntington Station Barnes & Noble on Long Island on May 24 with my fellow Cahill operatives Gordon Korman, Peter Lerangis and Jude Watson. So if you didn’t get to attend my earlier event in the New York area, you are welcome to come by!
This summer will be spent writing Kane Chronicles 2 (which will be published spring 2011) but very soon, we will begin gearing up for a fall tour for The Heroes of Olympus. The Lost Hero, published Oct. 12, will return you to the world of Camp Half-Blood with a new cast of characters, and of course an update on the gang from the PJO series as well. More information on that will be revealed soon, so stay tuned.