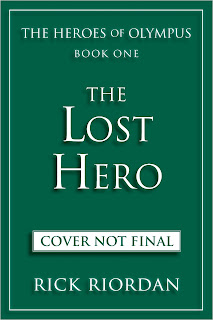 It’s official! Today, Disney-Hyperion announced that the second series of Camp Half-Blood adventures will be called The Heroes of Olympus. The first book, The Lost Hero, will be published Oct. 12, 2010.

The image above is not the final cover. That will be revealed this summer, along with more information. Who is the lost hero? Which characters from the first series will you see? Who are the new demigods? For now, I can’t drop any hints, but here is a short book description from the official press release:

After saving Olympus from the evil Titan lord, Kronos, Percy and friends have rebuilt their beloved Camp Half-Blood, where the next generation of demigods must now prepare for a chilling prophecy of their own:

Now, in a brand-new series from blockbuster best-selling author Rick Riordan, fans return to the world of Camp Half-Blood. Here, a new group of heroes will inherit a quest. But to survive the journey, they’ll need the help of some familiar demigods.