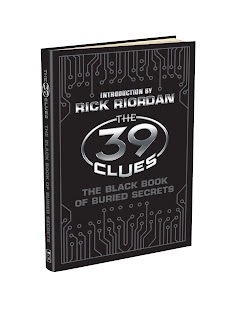 An exciting announcement just broke in USA Today. As the 39 Clues series reaches its finale with Into the Gauntlet this August, Scholastic Books will be offering Cahill agents the ultimate guidebook to the Cahill branches: The Black Book of Buried Secrets, to be published in October. (The cover above isn’t final. That will be revealed later.)

I wrote the introduction, which means I got a sneak preview of the book’s contents, and I can tell you it’s explosive stuff — literally. You will get the lowdown of each branch’s secret weapons, modes of transport, bases around the world, and top agent dossiers. I’m sure some Cahills will be scrambling to suppress this book, as it exposes all their secrets, so grab a copy while you can! It’s got some pretty amazing stuff inside.