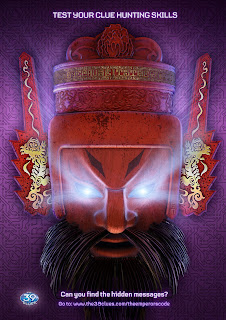 Exciting news in the world of 39 Clues! Cover art for Book 8: The Emperor’s Code, was released today, and it’s a sneaky cover. Four messages are hidden in the artwork. Some of them are really tough. If you can find at least three, you can enter them on the 39 Clues website and unlock a passage from the book, which gives hints about the next clue’s location. The book is written by Gordon Korman, who brought you the excellent second volume, One False Note. The Emperor’s Code will be released April 6. Happy clue hunting, Cahills!