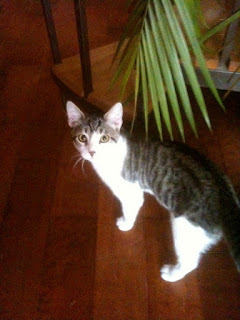 I’ve been meaning to share this story for a while, but with the New Year and a new series on the horizon, it seems like an auspicious time — and the Egyptians were all about auspicious timing.

A few months ago my stepdad was driving along the highway and saw a little abandoned kitten get hit by a car. The poor kitten tumbled to the side of the road and my stepdad was sure it must be dead, but he stopped anyway. The kitten was dazed and injured, so my stepdad scooped it up and took it to the vet.
Turns out this tiny kitten had been abandoned on the highway. Can you imagine anyone cruel enough to do that? Miraculously, it survived its injuries. My stepdad talked to the vet about what to do with it, as my parents already had two cats at home and couldn’t really take another.
The vet suggested they try to find another home to adopt it. Then he looked thoughtfully at the cat’s facial markings. If you look at the picture closely, you’ll see that the kitten has dark lines on either side of its eyes, so it looks like kohl, the black paint Egyptians used around their eyes.
“If you end up keeping it,” the vet said presciently, “you have to call him Pharaoh.”
When my mom heard this part of the story, she was amazed, because she’d just finished reading an early draft of my new Egyptian novel, The Red Pyramid, and cats play an important role in the book. My parents spent a few days considering adopting the cat to someone else, but Pharaoh is such a sweet kitten they couldn’t bear to give him up. I think Pharaoh knows they saved his life, and that makes him the cuddliest, nicest, most grateful cat you’ve ever met.
So now my folks have a cat named Pharaoh, who certainly lives a charmed life! We look forward to seeing him every week when we go over for family brunch. I consider Pharaoh the official mascot for the new Egyptian series, the Kane Chronicles, and I’m sure the ancient Egyptians would consider his presence very good luck.
Stay tuned in the weeks to come, as I’ll be giving out a little more information about the Egyptian gods, so you can have a taste of what’s to come when the Red Pyramid is released May 4.
Happy New Year, everyone!