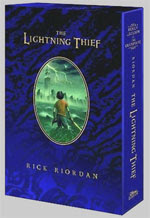 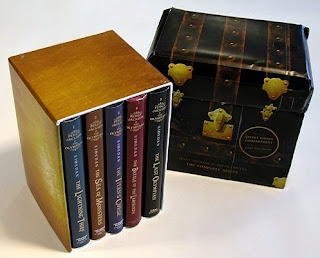 I got a present in the mail on Friday: the first, hot-off-the-press boxed set for the Percy Jackson series. It looks so awesome! It has all five hardcover books in a special camp chest with a secret compartment inside featuring a Camp Half-Blood map and other fun goodies. The boxed set will be available in stores starting Oct. 13. The Last Olympian paperback won’t come out until the spring, so a paperback boxed set of all five titles is probably still another year away, but if you’re looking for a very cool collector’s item, the hardcover set is awesome.

Other exciting news: Disney-Hyperion is releasing a deluxe limited edition hardcover of The Lightning Thief on Nov. 3. You can see it above in its fancy blue slipcover. This edition features brand new full-color illustrations by our gifted cover artist, John Rocco, and they are fabulous!
Looking farther down the line, Disney-Hyperion will release the Ultimate Guide to Percy Jackson in February to coincide with the Lightning Thief movie. The Ultimate Guide is a compendium of information and full-color illustrations of Percy Jackson’s world, including a bestiary of Greek monsters, and scrapbook of Percy’s life, a guide to life at Camp Half-Blood, a tour of the Underworld by Nico di Angelo, a trip through the Labyrinth, and much more.
Many of you have asked about a Percy Jackson graphic novel, and I’m pleased to announce it is in the works too. The tentative release date is 10/19/10. I’ve seen some preliminary artwork, and it looks awesome. I think you’ll be pleased with how Percy’s world comes to life in pictures.
Final bit of news: my Egyptian mythology book now has a release date — May 4, 2010! I can’t share the title quite yet, but that should be coming soon. John Rocco, who created the art for Percy, is busy designing a series logo and a cover for the Egyptian book right now, and I’m very excited!
Speaking of the Egyptian book, I did my first ‘sneak peek’ reading yesterday at the National Book Festival in Washington, D.C. It was a rainy day but we had thousands of people brave the weather. We had one hour for the signing time, which was not nearly enough to get everyone through the line, and unfortunately because of security concerns and the tight schedule of the festival, they couldn’t let me stay longer to accommodate more signing. I apologize to the fans who waited and didn’t get a book signed. I tried to catch as many of you as I could between the signing time and my presentation, but unfortunately I had to race to catch a plane after the presentation, and I wasn’t able to get to everyone. I really appreciate everyone who showed up, though!
We had a great time during the presentation. The tent was dangerously overcrowded, but everyone was super polite and no one got hurt as far as I could tell! The kids asked great questions. I read the first page from the Egyptian book, and the response was super enthusiastic, even though the sound cut out on us at the last sentence. How dramatic! Sorry I couldn’t spend more time with the thousands of fans who attended — you were all fantastic — but I enjoyed my brief trip to Washington. If you haven’t attended the National Book Festival, I highly recommend it.
Now I’m going back into writing mode. I have cleared this school year of most travel, since I want to finish the new Camp Half-Blood book as quickly as I can. My only other appearance this fall will be at the Texas Book Festival on Halloween, Oct. 31. You can check the TBF website for details. Hopefully I’ll be able to share that sneak peek at the Egyptian book, and I’m also going to bring something special for show-and-tell, but I’m keeping that a surprise.
Happy reading, everyone!