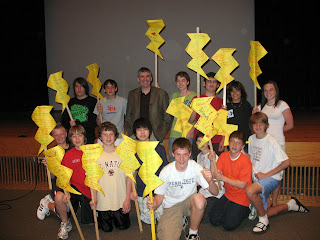 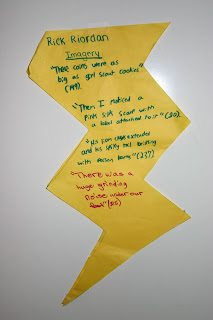 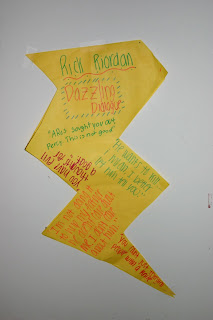 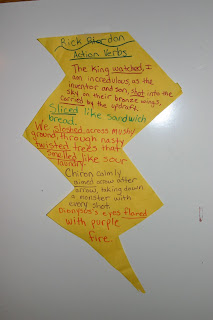 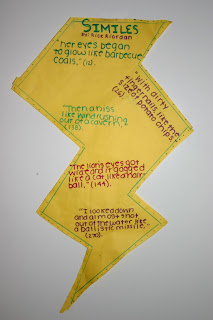 Just back from the PSLA librarians’ convention in State College, PA, but first, some older business from earlier in the week. The pictures above are from my visit to Holicong Middle School on Tuesday. You can see the lightning bolt class project I mentioned earlier. Another great teaching idea! The kids’ didn’t really have glowing red eyes. That’s just the way the photo came out, though they do sort of look like the Ares Cabin this way . . .

The conference at State College was a lot of fun. Friday morning I was presented with the PA Readers’ Choice Award. Thanks to my middle school presenters, Autumn and Sam. They called me the “Zeus of authors” and even gave me a laurel wreath to wear while I gave my acceptance speech. A guy could get used to treatment like that. 😀

On Saturday, I did a workshop for the librarians and spoke at the luncheon. I enjoyed talking with so many librarians from around the commonwealth and hearing stories about their kids who had gotten into the Percy Jackson series. Special thanks to Tina, the media specialist at Marshall Elementary, who handed me a folder full of pictures and letters from her fourth graders. They had just finished reading The Maze of Bones and had very nice things to say about the 39 Clues. Among their suggestions: They wanted one of the books to take place in England. They’d like to see one of the other teams help Amy and Dan. And they suggested calling the final book The Last Ingredient. Thanks for the ideas, guys, and stay tuned! Book four comes out in June.

On the way home I finished reading Uglies by Scott Westerfeld. I’m not sure why it took me so long to get to this book, but it was very good. The story moves along at a fast clip and the characters are engaging. It reminded me strongly of Logan’s Run (yes, I’m dating myself with that comment) but the book put a totally original spin on the concept of running from a utopia with a sinister side. Check it out. Once you read the first, you will definitely be looking for the two sequels.

Now it’s the calm before the storm! On Tuesday, The Last Olympian is released at long last, and I’m off on a whirlwind tour — three weeks, a different city every day. Again, you can see my web calendar for details, and I will do my best to blog from the road.