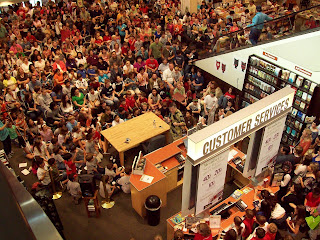 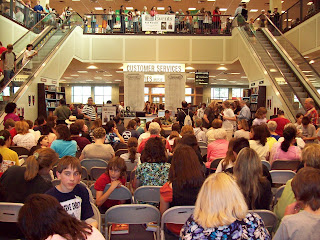 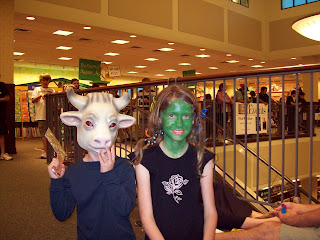 Home at last! Nothing like sleeping in my own bed. I never thought I’d miss waiting in the car pool line, but the highlight of my week was picking up Patrick from school!
Thanks to everyone who came out on the last leg of the tour. Mitch and the crew and Books & Books in Coral Gables put on a great event in a funky old church. Lots of Miami atmosphere, and an enthusiastic crowd. Thanks to Alyssa, who introduced me. As usual, my introducer was more organized than I was.

Little Shop of Stories hosted an event for about 1000 in Decatur at the local rec center. Always good to visit there. They gave me a cool Mythomagic card deck that they’ll be using this summer for Camp Half-Blood. I understand the Decatur branch has two sessions this year (both sold out) and they are cooperating with Camp Half-Blood Austin to do some of the same activities.

After Atlanta, I flew to Dayton, OH with a quick stop for stock signing at Joseph-Beth, Cincinnati (great children’s department). At the Books & Co. event, people came from all over Ohio and beyond.

Then, at last, I flew home yesterday morning, but my work wasn’t quite done yet. Last night I had a homecoming signing at San Antonio’s newest Barnes & Noble at La Cantera. This event was the official kick-off for the B&N Summer Reading program, for which I’m the national spokesperson this year. CRM extraordinaire Caren was well prepared as always, and it’s good thing, because the crowd was massive. Caren estimates over 3000 people came, making it the largest book signing event she can ever remember in San Antonio. What a nice way to come home. You can see pictures above, but even they don’t really capture just how large the crowd was, wrapped all the way around the upper level and completely filling the crowd floor of a giant store. I saw many former students in the audience, including the real-life Travis and Connor Stoll. Thanks for coming, guys! I stayed until everyone got his/her books signed, so we wrapped up after about three and a half hours of signing.

Once again, thank you to the booksellers who helped organize the events and worked so hard to make things run smoothly. Thanks to the parents and kids who waited in line for hours with patience and good humor. And thanks of course for all the great comments I heard from the road and the wonderful feedback on the Last Olympian. Now, I’ve got two books promised for 2010, and I’d better get back to work on them!