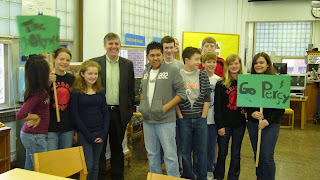 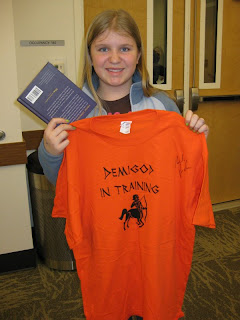 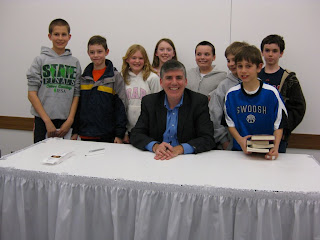 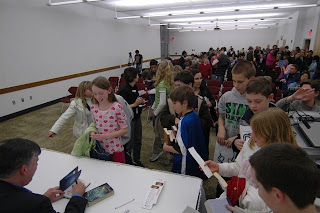 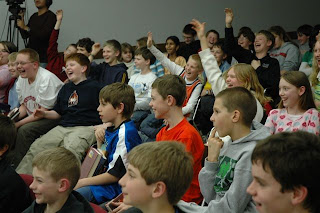 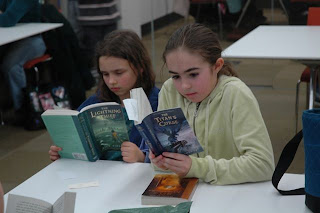 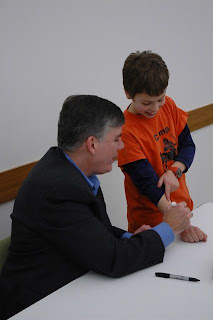 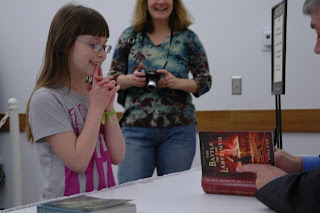 Above are some pictures from my visit last week to Champaign, Illinois. Thanks to Betsy at the public library for coordinating the visit and supplying the pictures. I visited three middle schools and did a public event at the public library. I understand the free tickets for the evening event were gone twenty minutes after they were made available. Yikes! Right after I left Illinois, I got an email from the Rebecca Caudill Young Readers’ Award committee (the Illinois state reading award) that The Lightning Thief had won for 2009. What an honor, and what timing!

As you can see above, we had a great time in Champaign. One young gentleman made his own Camp Half-Blood t-shirt. Actually we had quite a few of these! I’m always telling people they can make their own, which are often better than mine, and this was proof. We also had a couple of fans show up in Party Pony t-shirts, which I had never seen before. Kudos for creativity!

This week I’m in Rye, NY, just north of NYC, for three days of middle school visits. I’ll give you a report on that later in the week. I’ll also be visiting the Disney publishing offices in White Plains, which is the first time I’ve been there since they moved from Manhattan. We will be holding a meet-and-greet ‘pep rally’ to celebrate the imminent release of The Last Olympian. Only six weeks away now!