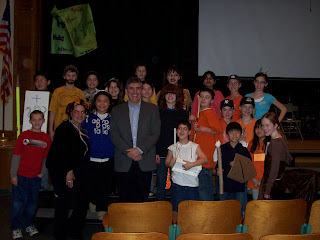 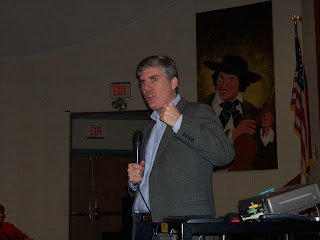 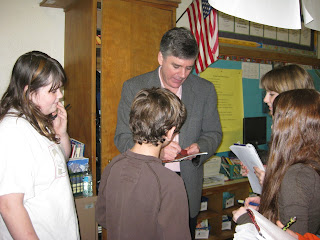 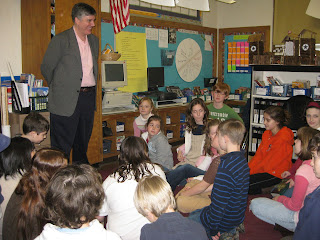 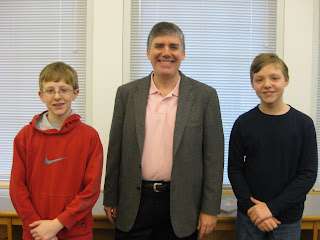 I’m back in San Antonio after a week in New York. Hooray for Texas winters! It’s 75 degrees and sunny, and I’ve traded my parka for shorts and a t-shirt.

Even if the week was cold in NY, the welcome I received was very warm. Thanks to Beth, the librarian at Setauket Elementary, for coordinating my visits. Above are her sons, George and Eric, who helped out on my first day. I set them up with Camp Half-Blood shirts and named them demigods of the week for their hospitality!

The second day, we squeezed in three school visits since Tuesday afternoon had been partially snowed out. At the first school, I got to meet with a book club where the kids had many great questions. Some had already gotten the Demigod Files from their school book fair and wanted to know if the Sword of Hades tied into The Last Olympian. The answer is ‘sort of.’ How’s that for vague? You’ll see what I mean when the last book comes out. The first signed copy of The Demigod Files went to a student named Nico, which seemed appropriate.

I also got a question I’d never heard before, and after all these years, that’s very rare. A girl asked, “What is your most prized possession?” I had to really think about that. I’m not very sentimental about stuff. As long as the people I care about are okay, the stuff doesn’t matter. I suppose I got that attitude when I was in college and my parents’ house burned down. But after a moment’s reflection, I decided my prized possession is a watercolor my mother did for me when I was twelve years old. It’s a picture of me with a quote from the Lord of the Rings, my favorite book at the time (and still one of my favorites). I then went to Arrowhead School for two more great assemblies. Special thanks to Mrs. DiPrimo’s class, pictured above, who dressed in costume for the day (Check out the centaur on the right) and presented me with a beautiful scrapbook. The third school of the day was also fantastic – and thanks to everyone for being flexible as we worked around our unexpected snow delay.

Thursday morning, I went to Mount Elementary, where the PTA had bought a book for every student who attended the assembly. Wow! The kids were beyond excited, and we had a wonderful visit. Special thanks to the Math Olympics team, who made me a welcome banner. They had adopted Percy Jackson as their team mascot, which I found ironic since Percy has a tendency to vaporize math teachers, but hey, whatever works for you!

Finally, on Friday, I spent the day in Manhattan. In the morning, we videotaped a mythology bee at Bank Street School (check percyjacksonbooks.com in a few weeks and you might see some clips from the event). I had a pizza lunch with the eighth graders, who I’d last seen four years ago when I visited for Lightning Thief. Then I got to browse and buy some books at Bank Street Books (great store), before heading downtown for a photo shoot. It was a long day but a good day!

Now it’s back to writing. I’m looking forward to the release of the Demigod Files on Tuesday. Also, stay tuned for an exciting announcement about The Last Olympian – more on that next week!