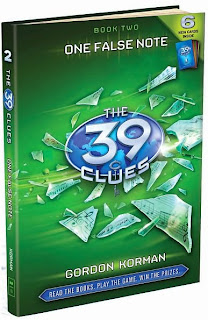 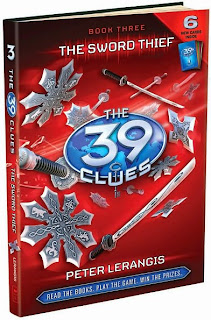 Yesterday marked the release of 39 Clues #2: One False Note, by Gordon Korman. I got to read the manuscript early and loved it, so I’m not surprised that early reviews of the book have been raves. I also found out that Scholastic has added some new content to the web game, including Arena 39, which sounds awesome.

Just this morning I was browsing for books on the Internet and was pleasantly surprised to find that the cover and title for 39 Clues #3 have been made public! I’ve copied it above: The Sword Thief by Peter Lerangis. The cover may give you some idea where Dan and Amy are headed on their third adventure. This book comes out April 1. Book #4 will be written by Jude Watson, which by the way is a nom de plume for Judy Blundell, who just won the YA National Book Award for What I Saw and How I Lied. I’d say Dan and Amy are in good hands.

Meanwhile, book 1, The Maze of Bones, enters week twelve on the New York Times bestseller list and is going strong. I’m glad so many kids are enjoying the series!