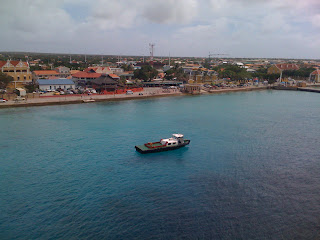 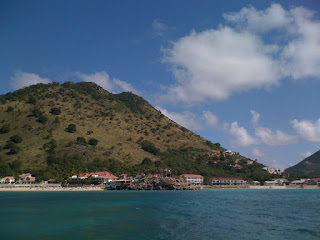 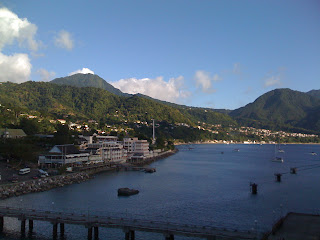 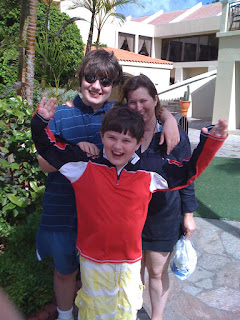 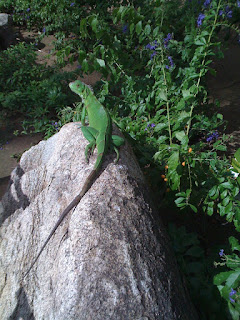 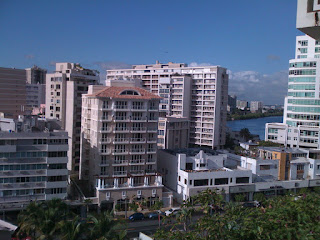 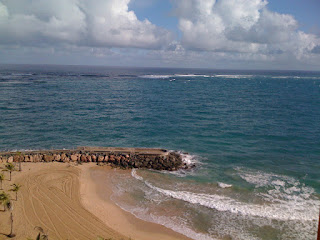 The following posts were done in segments during our trip and posted together because Internet access on board is difficult at best!

Day One:
Sailing from San Juan

Greetings from Puerto Rico. We arrived in San Juan last night, and the pictures above are the view from our room at La Concha this morning. Each time I come to San Juan I gain more appreciation for the city. Its Spanish colonial flavor reminds me of home (San Antonio) and yet the beaches, the Caribbean vibe, and the laid back atmosphere make for a unique and wonderful experience. It’s the perfect place to begin an adventure.

I’m writing from our cruise ship. We sail out tonight for St. Martin. Before leaving yesterday, I mailed off the (mostly) final version of The Last Olympian to my editor, so I think we’re very close to the text that will appear when it’s published on May 5. Revision is a long and delicate process, but I’m satisfied that Percy fans won’t be disappointed in the ending of the series. I know I’m happy with it. Once you finish The Last Olympian, I also think it will be fairly clear where the next series is heading – a whole new set of adventures and problems for Camp Half-Blood! But of course, that’s all I can say about that for now.

Have a good holiday, everyone! I’ll try to post again later in the cruise.

Day Four:
Somewhere off the coast of Venezuela

Christmas Eve Day, and we are sailing for Bonaire, a tiny island north of Venezuela and near the island of Aruba.

Sunday we arrived in St. Maartin and drove to the French side of the island for a glass-bottom boat ride around Creole Rock. We saw tons of fish, sea urchins, and fire coral (look, but do not touch). We’ve been to St. Maartin twice before, but for such a small island there is always more to see. I had never been to the French side before, and it is beautiful. Orient Bay is definitely on my list of places to see next time. The planes come in for a landing right over the beach – so low it’s almost scary. We saw the oldest church on the island, constructed of ballast stones from the days of sailing ships, and learned that St. Maartin used to be known for the production of salt, back when it was the only way of preserving food. Refrigeration put an end to that industry. Now, it’s all about tourism.

Monday we sailed into Dominica. Gorgeous, wild island. If I was King Kong, I would definitely live here. The interior is all cloud-covered mountains, most of it still inaccessible by road. I had no idea that the last 3000 Carib Indians (from whom we get the name ‘Caribbean’ and who Columbus first encountered) live on the north part of Dominica. Above, you can see some pictures of the port city Rouseau and the mountains behind it. We took a whale and dolphin safari during the morning, and were about to give up hope when we came across a pod of seven sperm whales that were socializing off the coast. There was a baby (very cute) and one whale who’d picked up some green algae, so his skin was a strange color blue. We also saw some false killer whales, and don’t ask me what makes them ‘false.’ I have no idea. The sail out from Dominica at sunset was a site to behold. Another place I definitely want to visit again.

Yesterday, Tuesday, we arrived in Grenada (pronounced Gre-nay-da, unlike the Gre-nah-da in Spain). The old fort looks down from a hill, and seemed to be pointing its antique cannons right at our cruise ship. A leftover from Ronald Reagan’s invasion of the island in the 1980s? Well, okay, probably not, but it was a cool sight. The harbor at St. George is really picturesque. We took a catamaran to Flamingo Bay to do some snorkeling, and then got to spend some time on the beach making sandcastles and swimming. The boys had a great time. Tonight, Santa will visit our stateroom. No chimney, but we have a nice big deck where he can land the reindeer.

Right now, I’m looking out at a rainstorm over the Caribbean. Hopefully it will clear up by the time we arrive in Bonaire! Merry Christmas Eve.

Merry Christmas from the island of windmills and cacti. Aruba, a desert island, only gets 14 inches of rain a year, and I think we got most of that this morning. It was pouring when we arrived, and continued to rain throughout the morning. Fortunately by this afternoon it had cleared off, so we caught a taxi to the Occidental Resort for a little beach time. Iguanas run free around the Occidental pool, which was very cool, but we had to be careful not to step on the little guys. Aruba reminds me a lot of South Padre Island in Texas, but with nicer beaches and bluer water. We are sitting on the balcony now, watching a warm steamy afternoon fade over the city. Tomorrow, we have a sea day as we sail back to San Juan. All in all, it’s been a great Christmas. During the week, we’ve been enjoying the Bone series of graphic novels by Jeff Smith. I started reading them. Then Haley got interested and devoured them. Now Patrick is just finishing book three. Unfortunately, we only brought the first three, so we’ll have to get more when we get home. It’s a great series with adventure, humor, and romance – and the coolest red dragon ever. Check it out if you haven’t yet.