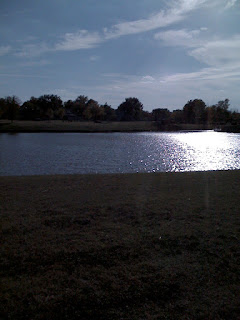 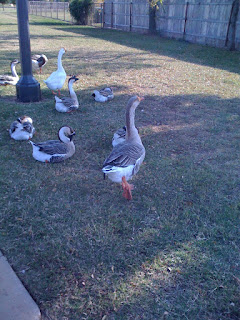 I just returned from three days of school visits in Wichita Falls, which is a small town about two hours northwest of DFW. I had a nice lake right outside my hotel which I got to walk around in the afternoon. The geese and ducks were my neighbors, as you can see.

Thanks to the Wilcox family and their other home-schooling friends who started their own Camp Half-Blood last summer. They had emailed with me previously and came to several events, so I feel like we’re old friends now. They made me a great scrapbook of all the events they did. When I got home I showed the scrapbook to Patrick who immediately said, “No fair! I want to do archery!”

The school events went very well. We had many visitors stop in to meet me. There are now a lot of kids running around Wichita Falls in bright orange Camp Half-Blood T-shirts.

We had an evening event Tuesday night (Election Night, of all times!) which was open to the public. It was a full house, so thanks to everyone who came out. The King Ranch chicken was yummy. A group of students attended who had won a contest at their school for designing FaceBook pages for Percy Jackson inspired characters. The first place winner brought his on a poster board. He had created his own satyr. Great project idea. If I was still teaching, I would definitely steal it. I got lots of thoughtful questions from the audience. One of the librarians asked me how I designed the character names. She pointed out that Grover sounded like ‘goat,’ Annabeth was close to ‘Athena,’ etc. She was sure I’d done this on purpose. If only I was that smart!

While in Wichita Falls, I finished reading Masterpiece, by Elise Broach. A really fun read. Boy meets beetle. Beetle turns out to be a gifted artist. Boy and beetle help foil a major art heist. It’s like a combination of Chasing Vermeer and Cricket in Times Square. Check it out.

Soon I’ll be off to Connecticut. I got a flood of email from kids who won’t be able to make the signing. They wanted to know if I’ll be posted the sneak peek of LAST OLYMPIAN on my website. Not exactly, but I will be posting a brief reading on You Tube, as I did with Battle of the Labyrinth, in about a month. Stay tuned for details.

Also this week, I heard from the Bogart family, pictured below, who started their own home-schooling Camp Half-Blood in Garden Ridge, Texas. I got confused there for a second, because both the Bogarts and the Wilcoxes gave me similar pictures and both have daughters named Kate, so sorry about that! Two totally separate home school camps, both very cool! 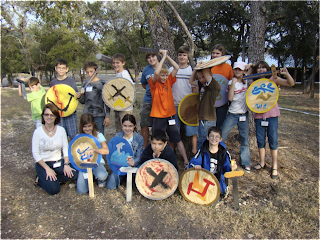