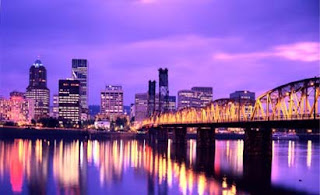 I’m sitting in the Portland Airport after an excellent two-day visit. This is my third trip to Portland in the last six months, and the more time I spend here, the more I appreciate the city. I can certainly see how it got its laid-back reputation. Everyone I meet is so casual and friendly and nobody seems in a hurry. Last night we had a public event at a downtown church, sponsored by the Multnomah Library. Over six hundred people came. Sara from the library told me it was the largest such event they had ever hosted. Thanks to Nick and Gina, high schoolers from the teen advisory board, who did a great job introducing me. The crowd was very enthusiastic, and afterwards everyone was so patient and polite even though the line for book signing was well over an hour long.

The kids in the audience had some great questions. I couldn’t tell them much about THE LAST OLYMPIAN, as the story is still top secret, but we did discuss the next Camp Half-Blood series quite a bit. My plan is for another five-book story arc, featuring a new generation of demigods, but with several of the original cast from Percy Jackson making appearances. The big question: “Does that mean Percy lives?” Well, I should probably be secretive about that, but as a general rule I do not believe in killing off main characters, especially when I’m using a first-person narrator. “And then I died” just wouldn’t make a very good ending. Special thanks to Nishaa, a young fan who gave me a glass pendant she made and a beautiful portrait of Annabeth (which I would show you if I had a portable scanner). Thanks to everyone who came out for the event – so many great stories about how people discovered the Percy series!

This morning I did a school event at Parkrose High School. A lot of local middle schools were invited and again we had a crowd of over six hundred kids. Thanks to Ian, another teen advisory member, who wrote a great introduction for me, and to the Multnomah Library for sponsoring my visit. Hopefully I’ll get back to Portland in May for the release of THE LAST OLYMPIAN, though no tour plans have yet been announced.

Now it’s back home for a day, then off to Arkansas to visit Pottsville Middle School, which won the Scholastic Books national contest to get a visit with me!