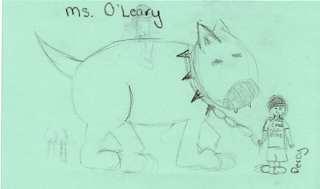 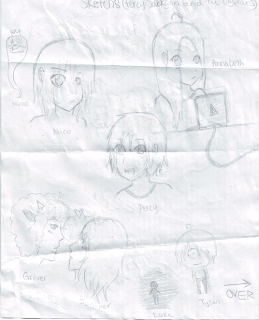 Most of this summer has been about finishing Percy 5, which is why my blog posts have been less frequent. I’m happy to report that the first readable draft of the book is done. I’ve read it to Haley and Patrick, which is always the first test. They gave it two thumbs up. Now I will revise it one more time and send it off to the publisher. Don’t get too excited. There are still many, many months of revisions to go, and the book will not be published until next May, but I’m happy with the manuscript so far! My sons’ biggest comment was, “When is the next Camp Half-Blood book going to be ready?” That’s always a good sign.

I took the weekend to dig my way out of a mountain of wonderful fan mail. Thanks to our artists above — Whitney from Union, Kentucky, who sketched Mrs. O’Leary, Amber, who handed me her sketches of various Percy characters while I was on tour, and Brayden from Kent, Washington, who drew Percy’s battle with Antaeus and tells me that I shouldn’t listen to all those other #1 fans. He assures me he is truly fan #1. Fortunately, I have a “big tent” policy and everyone who so chooses is welcome to be a #1 fan.

Thanks to the many others who wrote. Chase Academy from Seoul, South Korea, recently finished the Lightning Thief as part of their English language studies. I enjoyed reading letters from all the students. Frances from San Francisco wrote because she was concerned I had forgotten the goddess Hestia in the series. Not to worry, Frances! You will meet Hestia in book five. Julia from Bloomingdale, Illinois tells me she wants to be a young published writer like Nancy Yi. Keep at it, Julia! It’s rare that a writer gets published so young, so don’t get discouraged if it takes you a while. I started writing at age 12 and I was 29 when my first novel got accepted. But stay persistent, read a lot, and write a lot. Those are the three keys to getting published. Alexandria from my hometown of San Antonio asks if Rick Riordan is my real name, “or do you just use it to fake people out?” Believe me, Alexandria, if I made up a name, I would make up something that people could pronounce! Sujita from Beaconsfield, Canada wants to know simply, “What happens next?” Alas, that question I can’t answer until book five comes out! Sara from Albuquerque asks if Thalia has any other powers besides electricity manipulation. It’s possible Thalia has powers over the air and sky. The only problem is she’s scared of heights, so she’s probably never wanted to explore the possibility! Sara informs me she has roughly 204 more questions, but hopefully I answered a few of them in my response letter. Justin from Berkley, Massachusetts wonders if people recognize me in public and ask for my autograph. It happens occasionally, Justin, but being a writer is a lot easier than being an actor. Even if people know my books, they don’t usually know my face, so I can be anonymous most of the time. Finally, Julia asks if I’m worried that the movie version will ruin the book. I think every author worries about that! I keep my fingers crossed, but as John Le Carre once said (paraphrasing), Having someone turn your book into a movie is like watching someone turn your oxen into bouillon cubes.

Thanks to everyone else who wrote. I loved reading your comments and questions! More information about book five will not be available until the fall — probably October at the earliest — But stay tuned to rickriordan.com for the latest.