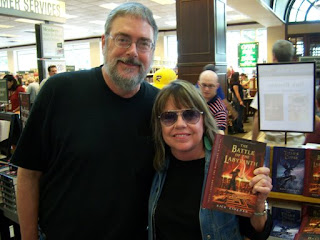 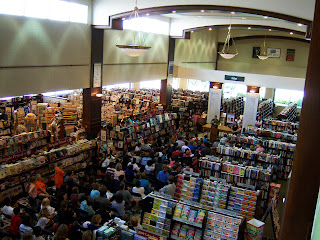 Thanks to all my Texas friends who came out for the last three Battle of the Labyrinth signings. On Wednesday I was at the Twig bookstore here in San Antonio. It’s always fun to do an event in my hometown because I never know who will show up or how I will be connected to them — old classmates, friends of my parents, neighbors of friends, parents of classmates, the possibilities are endless! I saw a lot of very happy and relieved school kids who had just enjoyed their first day of summer. Hooray and congratulations! Special thanks to Estrella, who couldn’t have been more than nine. She made her own Powerpoint presentation printout for me to pitch the idea of a Percy video game. She’ll make a great salesperson someday. In case you’re wondering, there’s been some talk and interest in a video game, but that’s all I can say right now. The rights reside with Fox, the movie studio, so we’ll see what happens.

Saturday I went to Read All About It in Boerne, always a fun town to visit. Thanks to my friends at the public library who sponsored a costume parade down to the bookstore. I saw a lot of Greek gods and goddesses, and even a few heroes who had whittled their own wooden swords. Kids came from as far away as Dallas and Oklahoma to attend the event. I’m honored you could join us!

Yesterday I was at the Arboretum Barnes & Noble in Austin for the final event. We had at least four hundred people, I was told, and I believe it looking at the pictures. That’s my Uncle Rees and my mom, who both attended the event and braved the crowds. Thanks, guys! Thanks also to Caren and Sasha, CRMs extraordinaire, who helped orchestrate the event.

Now . . . I’m just a writer again! I’m finishing up work on a short story project for Puffin Books. Then with luck I’ll be back to work on Percy 5. Happy summer, everyone.