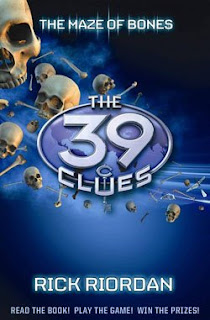 It’s a big day for 39 Clues. Scholastic announced today that DreamWorks has purchased the film rights to the series. Deborah Forte and Steven Spielberg will produce, and Steven Spielberg is considering directing the project. (Deborah Forte, who is very nice, called me yesterday and said, “Yes, Steven will be producing with me.” And I was like, “Um, when you say Steven . . .” And she said, “Rick, there is only one Steven.”)

Wow. Just when I thought nothing more could possibly surprise me. You can read the story in Variety here.

Also today, Publishers Weekly reports that the first print run for The Maze of Bones, the first 39 Clues book written by yours truly, has doubled from 250,000 to 500,000. They will also be printing half a million card packs, which is about what my sons have stashed away in their room. You can read the PW story here.

It’s exciting to be part of a project like this, and I’m so glad it’s already generated such a positive response. I hope you’ll enjoy Maze of Bones, which will be published September 9.