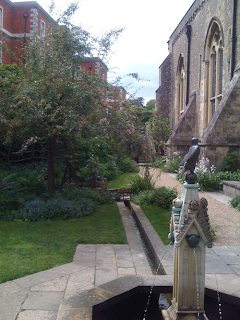 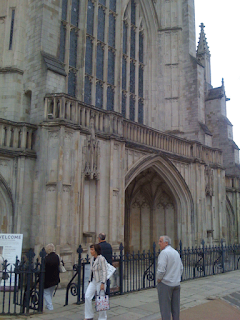 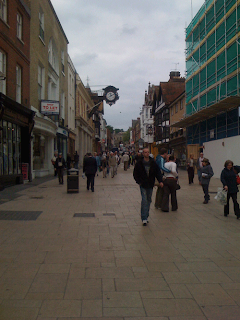 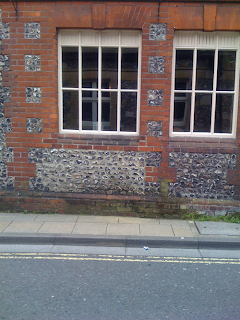 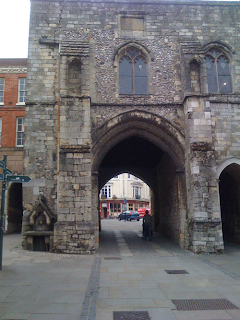 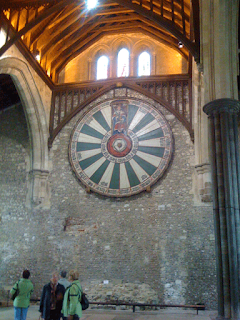 I’m just about over my jet lag after my second day in England. I had lunch yesterday in London with a group of journalists and reviewers. Ironically we ate at Christopher’s, an American restaurant, so I had the California black bean soup after coming five thousand miles from California, where I was last week. When I get back to Texas, I’ll have to have bangers and mash just so my culinary karma balances out. Our lunch conversation was interesting and far-ranging – from the virtues and vices of adapting books into film to the reading habits of kids to the differences between public and private school curriculum (public and private having completely reversed definitions in the UK).

I could have chatted longer but our time quickly ran out and my publicist Adele rushed me off to the BBC for a radio interview on the program Go 4 It. Thanks to Joshua, Lily and Lucien, my three young interviewers who asked great questions. Joshua was a huge fan and came wearing his homemade Camp Half-Blood T-shirt. A dyslexic like Percy, Joshua had scarily comprehensive knowledge of the Percy Jackson books. During the quiz game section of the show I think they finally had to disable his buzzer to give the others a chance! Lily asked about the strong female characters in the Percy series, and whether they came from mythology, or whether I had to modify mythology to make those characters possible. The answer is a little of both, and we had a great conversation about it. Lucien, the youngest at seven years old, asked me whether I had audio versions in mind when I wrote the stories. I answered that I absolutely did. Each Percy manuscript is read aloud to my sons before it’s sent to the publisher, which helps me streamline the story. You can hear the interview two Sundays from now. If you don’t live in the UK, you can still access it anytime after the airdate through the BBC’s website. Just look for the program Go 4 It.

After the taping, I visited the Penguin offices on the Strand to do some more interviews and a podcast. Then I called it an early night back at the Waldorf. (Yeah, I know. It’s a tough life.)

This morning I had my venti skim latte at Waterloo Station before boarding the train to Winchester. I’d never been to Winchester before, and it’s a lovely city. (I have to be careful with the terms “town” and “city” now that I’m in the UK. In the States, we throw these words around as synonyms, or choose the term based on the size of the population, but in the UK a city by definition is any place that has a cathedral, no matter how small the population.) Winchester has a beautiful cathedral, where I learned Jane Austen is buried. The old historic center of the city is made of unique flint and brick construction. You can see examples above. It’s quite beautiful. I did a presentation for about four hundred students from a variety of schools in the city’s guildhall. I was honored to accept last year’s Hampshire Book Award (voted on by students – my favorite kind of award), and the students were very enthusiastic and excited. They had no trouble with my Greek mythology quiz, and after I gave out T-shirts to the winners I signed books for a long time!

We then went to the town’s Discovery Centre, a beautifully renovated library, for the second presentation. Again, great kids! My favorite question: “If Percy Jackson were older, who would he be voting for in the American presidential election?” I said I’d never discussed it with Percy, but I would ask him!

Afterwards we had some time before our train, so our host Anne took us on a brief tour of the city. In the Great Hall, we saw a King Arthur’s roundtable from the 13th Century (too recent to be the actual one, of course, but still pretty cool) and took a stroll through Queen Eleanor’s garden, modeled after a garden in a medieval painting. As with so many cities in England, our brief tour just convinced me that I’ll have to come back and have a better look some other time!

Now I’ve just gotten off the train in Bristol and checked into the Hotel du Vin. Tomorrow, another whirlwind trip from Bristol to Newport, Wales and back to London. I’ll keep you posted!