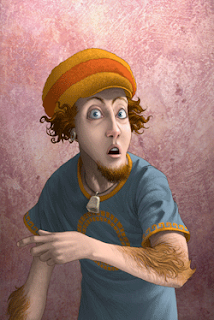 Grover says, “Yikes!”
Good question from the L.A. Festival of Books which I’ve been meaning to share: An astute young fan asked, “Could Annabeth and Percy ever get together? Since their parents are both gods, doesn’t that make them related?”
That would complicate things for all the young demigods at camp, wouldn’t it? Here’s the way I see it: The godly side of your family does not count, genetically speaking. You could drive yourself crazy if you thought about it — everyone is somebody’s cousin, nephew, half-brother, uncle, or whatever. But gods are special beings. They don’t have DNA and each god is a force unto himself/herself. They pass on some of their power to their demigod children, but not the entire bloodline of the Olympian family. Perhaps that’s why the gods have no qualms about intermarrying each other in such a small clan, unlike humans.
Being related on the Olympian side doesn’t mean the same thing as being related on the human side. A demigod would never think about dating someone who had the same godly parent. Two kids from the Athena cabin? No way. They are indeed siblings. But a girl from Athena and a guy from Poseidon? That’s not a problem. They are not related (unless they happened to be related on the human side). This is NOT implying anything that will happen in the book. I’m only answering the question, “Is it possible?” Yes, it is.