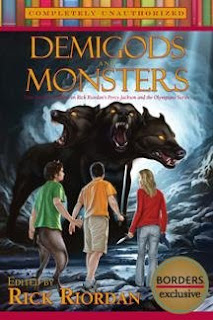 For those of you who are interested, here’s a first look at the cover for the Demigods and Monsters anthology from BenBella Books, distributed by Borders. I wrote the forward and a brief introduction for each section, but the bulk of the book (and the really fun stuff) is a collection of essays by a variety of different authors, tackling all sorts of themes and questions about the Percy Jackson series.
Here’s the description from the back of the book:
How are the Greek gods like your middle school principal?
Would you want to be one of Artemis’s Hunters?
Why do so many monsters go into retail—and why are they never selling anything a demigod really wants?

At the beginning of The Lightning Thief, Percy Jackson tells us to stop reading: if we suspect we, too, might be demigods, we should put the book down right away. But how can we, when the world he lives in is so much fun?

Spend a little more time in that world—a place where the gods bike among us, monsters man snack bars, and each of us has the potential to become a hero.

· The pros and cons of having a god as a parent
· Why Dionysus might actually be the best director Camp Half-Blood could have
· How to tell a monster when you see one
· Why even if we aren’t facing manticores and minotaurs, reading myths can still help us deal with the scary things in our own lives

PLUS, consult our glossary of people, places, and things from Greek myth: how Medusa got her snake hair extensions, why Chiron isn’t into partying and paintball like the rest of his centaur family, and the whole story on Percy’s mythical namesake (could it hold clues to Percy’s fate?).