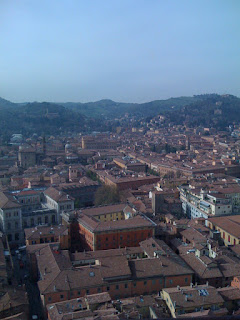 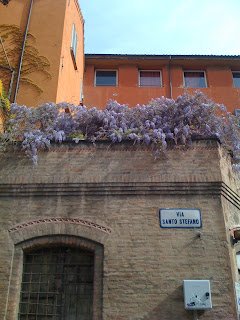 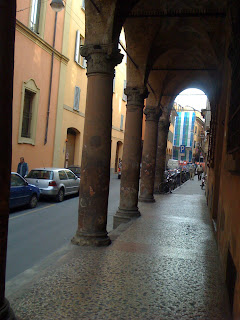 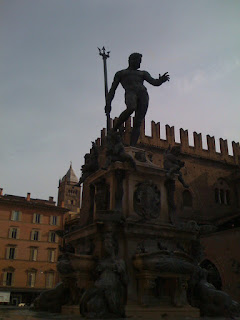 My second day in Italy and I’ve almost adjusted to the time change.

I stepped off the plane on a beautiful Sunday morning. My luggage actually arrived – hooray! I checked into the Hotel Baglioni in the heart of the historical city center, took a short nap, and then worked on Percy 5 for a while before meeting up with my agent Nancy for a reception and dinner.

It’s a bit daunting going to these publisher parties in Bologna because everyone knows everyone. Nancy compared it to a high school reunion, because so many of the attendees have been coming to the book fair for twenty years or more. Despite being a book fair ‘noob,’ I saw many familiar faces and made quite a few new friends. I got to catch up with Riley Ellis from Fox, who tells me that preproduction work on the movie is going well. They are still working out the budget, doing concept art, and tinkering with the script. Apparently they’ve brought in another writer to work on it under Chris Columbus’s direction, but she assures me this is a good thing, not a problem! One interesting detail: they’re having a debate on how to do Grover. Making a satyr come to life will take some special effects magic. I look forward to seeing what they come up with!

I also met agents and editors from Turkey, Sweden and the UK, just to name a few, as well as Nancy’s husband Craig Virden, former president of Random House Books for Children, whom I’d heard about for years but never met in person.

After the Random House reception, we had a lovely dinner (is there any other kind in Italy?) at Rodrigo. Between Craig’s Italian and the waiter’s English, they managed to arrange some delicious vegetarian courses for me. I had pasta with mushrooms and cheese tortellini, followed by an entrée of fresh asparagus topped with two eggs over easy. Diane Roback, editor for Publisher’s Weekly Children’s Bookshelf, had the same thing, and remarked that it saved us the trouble of having breakfast the next day! The conversation was lively, which was a good thing considering my jet lag, and I got some excellent tips on what to see in Bologna.

This morning, I set off with map in hand to explore the old city. You can see some of my pictures above. I thought the statue of Poseidon was a very good omen. That guy shows up everywhere! I told him Percy said hello. I wandered down to the San Stefano church, which has a lovely quiet square and some cool crypts. Then I decided to climb a tower, which is not recommended for authors over forty who aren’t in shape, but no one told me that. The ticket guy just took my three Euros, grinned evilly, and let me go up.

There are two towers at the center of the city. The short one leans, so I decided to climb the tallest. And I mean that thing is tall. I took my time going up and thought about quitting at several points, but I persevered. The view was worth it. You can see my shots from the top, but it’s hard to convey in a picture how panoramic the scene is with the sea of red roofs, cobbled streets and the sunlit hills in the background. My legs are going to kill me tomorrow, but I’m glad I took the climb!

Tonight, Scholastic is hosting a dinner to preview The 39 Clues for the foreign publishers. The guest list is a real who’s-who of movers and shakers from all over the world. I’m looking forward to it! Tomorrow, I’ll be visiting the Disney booth to celebrate the Percy Jackson series. Hyperion Books for Children will also be making a major press announcement about the books tomorrow morning. Stay tuned for that!
And now, darn it, it’s time for another Italian meal. I’m thinking ice cream for lunch. Hey, if I can have fried eggs for dinner, why not? I’m off to check out a gelato shop that Craig tells me is the best in Bologna. I’ll let you know! 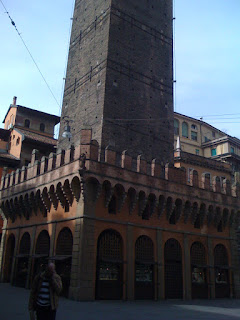 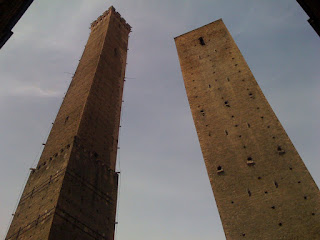 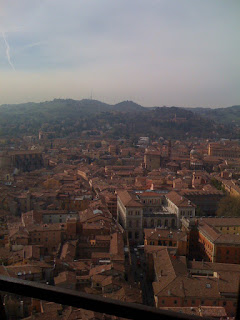 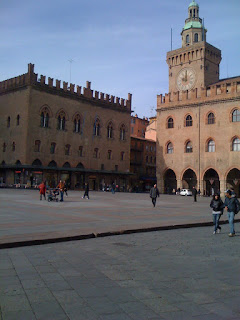