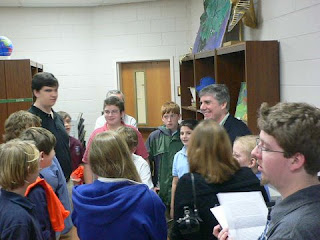 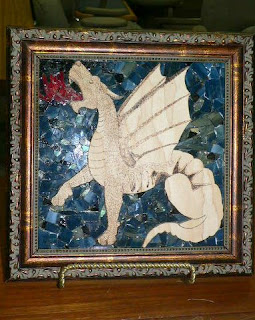 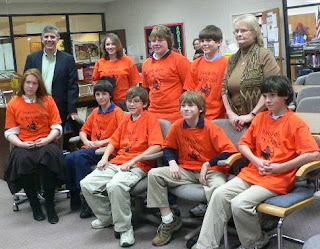 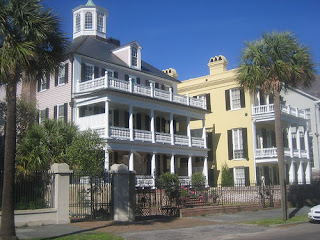 I’m writing from Charleston, South Carolina at the close of another whirlwind trip.

Coming here was a last-minute addition to my schedule. Scholastic was holding a marketing meeting at the Harbor Club, and I was invited to be a surprise guest. They arranged to fly me in on Sunday night for a Monday evening speech, and since I had nothing to do all day Monday, I looked up a local school for kids with learning differences – Trident Academy. A week before I arrived, I contacted them and asked if they’d like me to stop by. As my older son is ADHD/dyslexic, like Percy Jackson, I like to do outreach to LD schools whenever I can. Mary the librarian and the rest of the staff at Trident were wonderful hosts. I got to tour the school and do a presentation for the kids – young demigods, all.  I even got to sit in on an upper school writing workshop and steal (er, I mean glean) some great creative writing prompt ideas! Special thanks to Julia, an upper school student, who made me a beautiful framed dragon picture from burnt wood and cut glass.

Afterwards, some of the staff – Mary, Lalla and Mark – took me to lunch at Magnolia’s in downtown Charleston – where I learned of a dish called shrimp and grits. Who knew? Being from Texas, I was too much of a tortilla-and-frijoles man to attempt grits, but they looked surprisingly great, and I enjoyed my flounder. After lunch, Mark, who is a professional city tour guide, gave us a personal tour of the historical peninsula. What an amazing city – so much Colonial character remains. I got to see the stately South-of-Broad-Street homes, their porches lit by gaslight twenty-four hours a day (I’m told everyone in Charleston wants to be an SOB – South of Broad). We saw the old dungeon where the pirates were kept, the Battery with its cannons and gazebo and great views of Charleston Harbor, and of course Fort Sumter, where the Civil War began. As a history buff, I ate it up. I got chills when Mark pointed out the balcony from which General Beauregard watched the shelling of the Union fort.

That evening, I was smuggled into the Charleston Harbor Resort, where the Scholastic marketing teams were busily hunting for clues around the hotel. I was the final “treasure” and got to hand the winning team $100 gift certificates. Fortunately, they did not require me to paint myself gold. We had a fun dinner on the piazza overlooking the harbor. Scholastic had even arranged for a 39 Clues ice sculpture as the centerpiece. Hmm. Never had my own ice sculpture before. Maybe I should look into a flaming “Percy Jackson” display for my next Hyperion event . . .

I was impressed by the enthusiasm for 39 Clues. Everybody at Scholastic is so excited about it, and I understand the reaction from booksellers has been equally strong. The biggest question I got asked all night: “Are you really a gamer?” Yes, it’s true. In my spare time I do play video games. (I did tell you I never grew up, right?) I’ve been a gamer since my college days when I’d play Dungeons and Dragons with my friends, way before we had computers or on-line worlds to explore. Nowadays, I play World of Warcraft and occasionally other games (though it’s not like I have a lot of time to play). My gaming background is one reason I was so interested in 39 Clues. The books stand on their own, but there’s also going to be an amazing on-line component. You can log in to the website, create a character, and become part of the Cahill family looking for the 39 Clues. I’m looking forward to seeing the game in action when the series debuts in September.

Now I’m at the Charleston Airport, getting ready to head home. Thanks to everybody who made my trip here so memorable. Definitely this is another place I’ll have to visit again! 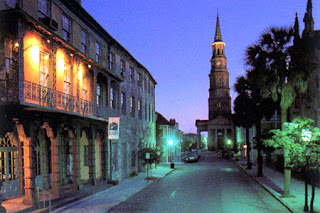