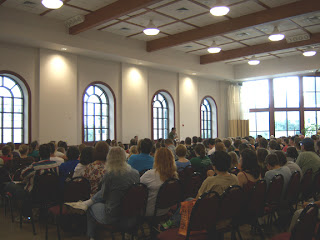 Those folks in Austin know how to throw a party. I made the decision to commute from San Antonio to avoid more time in hotels and get to spend evenings with the family, which means I’ll be driving to Austin for festival activities three times this weekend, but it’s been well worth it.

Friday was my first time participating in the Reading Rock Stars program. I spoke with the 3rd-5th graders at Reilly Elementary and they really rolled out the red carpet. I’ve never seen so much breakfast food! The library was decorated with huge drawings of Greek monsters and gods, and the kids were very well prepared. The festival provided each child with a signed copy of Titan’s Curse. The kids were so excited I felt like Santa Claus. This is really a worthwhile program. Any other children’s authors out there, if you’re ever at Texas Book Festival, definitely consider participating. At the luncheon afterward, I got to meet Michael Hoeye (Time Stops for No Mouse) and catch up with Deborah Wiles. I met Deborah in Houston a few months ago when we shared space at a school book festival. Her great presentation was one reason I finally broke down and made a Powerpoint! If you ever get to see her speak, you really should do it. I wrapped up the day with a quick visit to Trinity Episcopal School — bright kids with lots of enthusiastic questions, beautiful campus.

Yesterday, Saturday, I arrived early to do a video shoot for a short promotional film Hyperion is making. We were going to meet at a little park on Guadalupe, but there was a homeless rally going on so we went next door to the Austin Public Library. They graciously let us take over their children’s section. After the filming, a mom appeared out of the stacks and said, “My son loves your books!” It turns out Thabo, her son, was over at the magazine section, so we went to surprise him. I thought the poor kid’s jaw was going to drop off his face. His mom said they almost went to the comic store instead of the library, but they were really glad they happened to hit the library. Fortunately, my publicist Deborah had an extra set of books, so I was able to leave Thabo with a signed souvenir!

Afterward I strolled over to the capitol building and hung out in the authors’ green room, which is always a treat. I’ll send a shout out to young authors Pia and David who were there to read their work. It was a pleasure to meet them, and I wish I had that much poise when I was their age. I also got to chat with Steven Saylor and Jesse Sublett — got to see Joe Ely but didn’t get to introduce myself. Sherman Alexie came up and introduced himself, which kind of blew me away. Apparently his son Joseph is a Percy fan! I was bummed that I didn’t get to see Sherman speak, as our events overlapped, but we got to take a picture together for Joseph. I also got to talk with Jeff Kinney for a while (Diary of a Wimpy Kid) — really nice guy, and his book sounds great, so add another one to be “must be read” pile!

My talk was held in the Family Life Center of the First Methodist Church. I went over a few hours before the event to check out the space, and my first thought was, “Uh-oh.” The place is the size of a basketball court (actually, it *is* a basketball court), and I thought, “There’s no way we’re going to need this much room.” Even a huge crowd would’ve looked tiny in that sea of chairs. I am still very much in the mode of thinking that when I hold an event, no one will come. I know I’m not the only author who dreads this. I just spent too long touring before the Percy books, and I’ve seen my share of empty events. I’ll be darned . . . we filled the place, as you can tell from the picture, which was taken by my parents from the back of the room. That tiny little figure in front is me. I did my first-ever reading from “The Battle of the Labyrinth” and it went very well, probably because the crowd was so friendly! We did the quiz game T-shirt giveaway and Q&A, followed by a signing downstairs. Thanks to everyone who came out and waited in line so patiently. Special thanks to my friend and author extraordinaire Jeff Abbott, who came with his family, and Linda Sue Park — another great author I wish I’d been able to see — who came by and introduced herself at the signing. And of course, thanks to my volunteer escort Mary G, and to Topher from BookPeople, who not only introduced me, but stayed to help with the signing for an entire hour. It was a great day, and I can tell you that I slept well last night.

Today, I switch hats and become an adult mystery writer. I’ll be heading back up to the festival for a panel with Diane Fanning and Harry Hunsicker. Come on by if you’re in the area!