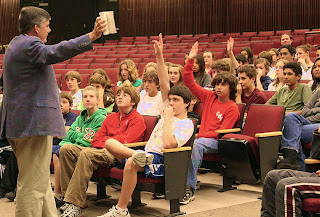 Yesterday Jeanne DuPrau, Neal Shusterman, Gail Carson Levine and I spent the day visiting the middle schools of Westport, Connecticut. I’d never spent the day traveling around with other authors before. I felt like the Prize Patrol or something.
We began the day at Bedford Middle School, which is a beautiful new campus. One of the teachers told me the site used to be a guided missile facility. I’m sure there’s a joke in there somewhere about the similiarities between guided missiles and middle school, but I’ll let it pass. The kids were phenomenal. They had been very well prepared, and were quite familiar with our books. My favorite question of the morning: “How do you write the prophecies in the books?” The answer: I write them last, after I know the plot of the book. Then I can predict the future through the Oracle! My only regret was that I wasn’t allowed to sign books due to our time constraints. Hopefully some of the kids will be able to come to the public book signing today at the Rabbit Hill Festival. I met quite a few aspiring writers. At lunch, Gail Carson Levine generously read and offered a critique to two girls who had brought her writing samples. That is something those girls will remember forever. I got to sit in on Neal Shusterman’s presentation, and he has great rapport with the kids. Neal is a veteran traveler — everywhere I go, it seems like he was there last week, and I can definitely see why he’s in high demand. I especially like his toilet lobster story. Ask him about it some time!
After lunch, we headed over to Coleytown Middle School for another two presentations. That’s me at Coleytown in the photo above, talking with eighth graders. I got the usual requests to sign foreheads, binders, arms, etc., but I’d never had anyone ask me to sign their socks before. I declined . . . quickly.
We had dinner at the Red Barn Restaurant. Gail and I took a taxi over there, and had an interesting conversation with our driver. He said he works as a tow truck driver from 8-4 five days a week, then gets in his cab and drives until 1 AM. He figured he works about a hundred hours a week so his wife can stay home with their two small children. After hearing that, I decided I have no right to complain about anything ever again.
Dinner was fun — a chance to chat casually with librarians and book lovers. Today, the main event starts at Sagautuck Elementary School. It’s a rainy cold day in Connecticut. If it were me, I’d be curled up with a book next to a fireplace, a cat on my lap, but hopefully the attendees will brave the weather!