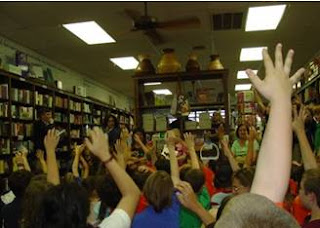 Back home in S.A. for a day! Thursday evening I had a great event at Blue Willow Bookstore. Despite the fact that Zeus hurled thunder and lightning outside, we packed the bookstore with kids and parents. Special thanks to the kids from Youngblood who made me thank you cards, and the “Monster Assault” fourth graders who drove all the way from Spring to attend. The whole class had made their own Camp Half-Blood t-shirts and they looked great. The picture above shows you how crowded it was. That tiny little figure in the sea of hands is me.
Friday I did a school visit at Ferguson Elementary in League City. Thanks to Ashton and Griffin, fourth graders who served as “Librarians of the Day.” They help me with the book signing and did a very professional job. We had a nice lunch together with several other librarians from neighboring schools. Ashton and Griffin are demigods of the week!
Today, Saturday, I had two back-to-back signings. In Boerne, we had a crowd of about 200 people at Read All About It Bookstore. Kids started with a costume party at the public library and paraded down Main Street to the bookstore. I saw Hades, Aphrodite, and Athena, along with Medusa and quite a few others. I always love coming to Boerne because the folks there are so welcoming and enthusiastic. After that I had an afternoon signing at Barnes & Noble in San Antonio. Over five hundred people attended. The store hosted great activities including a Grover photo board, make-your-own-medalion, laurel wreath making, and more. The Oracle was on hand to give out prophecies. We had kids come from as far as Corpus Christi for the event. Thanks to everyone who came out and waited so patiently to get books signed!
Tomorrow it’s on to L.A., where no doubt I will have to explain why I put the Underworld under their fair city!