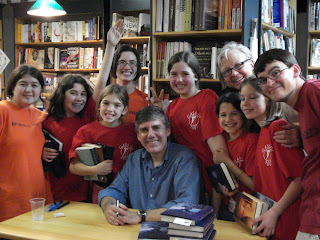 They called themselves the “crazed fans.” They came in force to Diane’s Bookshop in Greenwich, Connecticut. And they took no prisoners.

One had named her cat Annabeth. Another wanted me to sign her arm in permanent pen (no, Nicola, bad idea!) Another had read the Sea of Monsters 214 times. That would be Annie, the one making bunny ears over my head in the picture. All of them had fabulous questions an infinite enthusiasm. Thanks, o crazed ones, for coming to the signing!

And they weren’t the only ones. Diane’s was absolutely crammed with people, despite the threatening weather outside. I did a reading upstairs, with parents spilling down the staircase and kids very cozy on the floor. It was a fun crazy time. Diane herself continues to amaze me. She is one of those booksellers who can hand-sell anything because she is so passionate about what she does, and her knowledge of books is encyclopedic, or more aptly wikipedic. Several kids asked me to recommend good Greek mythology books, and I just pointed to Diane. “There’s your supplier,” I said. “She’s got a collection that makes mine look paltry.”

As Diane would admit, however, she is not quite as well-read on the streets of Greenwich! Earlier in the day we took an extremely scenic tour of the city while trying to get to a school visit at the Brunswick School. But hey, if have to be lost somewhere, it might as well be Greenwich. What a beautiful town. We got to the school JIT, as Diane says. “Just in time.” Thanks to 5th-grader Ashish for his eloquent introduction. The boys, grades 4-8, were an enthusiastic audience. I even met a boy who is the cousin of a former student of mine from Saint Mary’s Hall. Small world, indeed.

The day started with a visit to the Disney/Hyperion offices on Fifth Avenue. I had an interview for Newsday/Kidsday with two seventh grade reporters, Murali and Evan. They had insightful questions prepared and we had a really nice talk. They also got some awesome swag bags full of books to take home with them, compliments of Hyperion. I was kind of jealous!

Afterwards, the entire Disney/Hyperion staff turned out for a breakfast to toast the Percy Jackson series. I’d never seen the whole publishing division in one place before, and it was a big honor that they’d come out just for me. (Well, me and the tons of free food!) It turns out we have a lot to celebrate. Percy Jackson will again be #1 on the New York Times children’s series list for the week of May 27.

Today it’s off to New Jersey for some school events with Books, Bytes and Beyond. I will try to steer clear of Medusa’s Garden Gnome Emporium. Tonight, one last event in New York at Books of Wonder at 5 PM, 18 West 18th Street. Come on by if you’re in Manhattan!