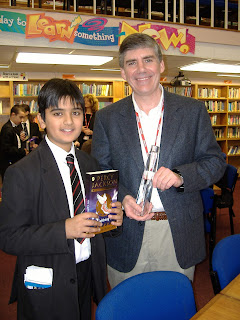 On my recent trip to Warwick, I met Fahrid, a young man who was chosen to interview me for First News, the British newspaper written entirely for and by young readers. Fahrid did a great job with the interview, which appears below. Thanks to Fahrid, demigod of the week!
First News

Following the culminating ceremony for the Warwickshire Secondary Schools Book Award 2007, winning author Rick Riordan, claimed his prize after ‘Percy Jackson and the Lightning Thief’ was voted the children of Warwickshire’s favourite book. Luckily, Rick, from Texas, happened to be paying a visit to the U.K on a book tour and agreed to come and officially receive his award at Myton School, where children from eight participating schools across the county had gathered, eagerly awaiting his arrival.

It was not long before he arrived at Myton School’s Library Resource Centre, where the presentation took place. Once the ceremony was underway, two spokespeople from Warwickshire’s Schools Library Service introduced Rick to the audience. He then spent time, sharing his first ideas for storylines when he was only thirteen years of age. He told us about how he had always had an ambition to write, but could never find what to write about! When he was thirteen he wrote a story about a child who went to heaven and had a conversation with an angel. He showed this to his schoolteacher who was amazed, and advised him to get in touch with a publishing company. He did, but the editor rejected his request saying it just wasn’t right for a magazine. His mum very proudly framed his rejection note and hung it up but Rick said it forever haunted him.

He then questioned the children in the audience, asking them what material they read and wrote, in terms of genre. He also gave out ‘blue candy’ and tee shirts in a quiz about Lightning Thief.

After his talk, Rick read a passage, as a sneak preview for his next book – ‘The Titan’s Curse’. No one, apart from the author and the editors had read it yet and it is due to come out in stores in America on the 1st May. He read the passage out loud, and with great enthusiasm! He read up to a crucial cliff hanger where Percy, the main character of the series, finds himself approached by a mysterious character. This is where he left the book, and everyone was intrigued, including the adults!

He then, with great pleasure, accepted his award from the Warwickshire Schools Library Service and then asked the children if they had any questions for him. There were loads! Amongst the many searching questions that were asked, one stood out. The child asked “Where did you get the idea for ‘Lightning Thief’ from?” Rick replied, “My son was finding it hard at school; he didn’t enjoy reading, nor writing. However the one thing that really appealed to him was Greek mythology. He said to me one day, Dad, wouldn’t it be cool if the Greek gods were still alive”. And this is what triggered the idea.

To conclude this event Rick Riordan then took the time to sign books before setting off to Birmingham for his next stop.