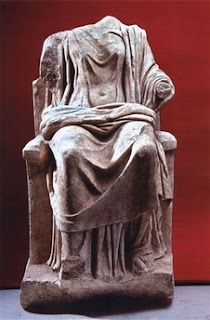 Great article in the news about on-going excavations in Greece. This statue of Hera (which unfortunately got beheaded at some point) was found in the ruins of Dion at the base of Mount Olympus. It’ll be interesting to see what else the archaeologists discover!

THESSALONIKI, Greece – A 2,200-year-old statue of the goddess Hera has been found built into the walls of a city under Mount Olympus, home of Greece’s ancient gods, archaeologists said on Thursday. The headless marble statue was discovered last year during excavations in the ruins of ancient Dion, some 53 miles southwest of Thessaloniki.

Archaeologist Dimitris Pantermalis said the life-sized — by human dimensions — statue had been used by the early Christian inhabitants of Dion as filling for a defensive wall.

He said the 2nd century B.C. find appeared to have originally stood in a temple of Zeus, head of the ancient Greek gods — whose statue was found in the building’s ruins in 2003 and after whom Dion was named.

“We have reached the conclusion that the statue of Hera stood next to that of Zeus in the temple,” said Pantermalis, a Thessaloniki University professor who has headed excavations at Dion for more than three decades.

Hera was the long-suffering wife of Zeus, a notorious philanderer, according to ancient mythology.

“The statue represents a female form seated on a throne, and is made of thick-grained marble like the one of Zeus,” Pantermalis said. “It shows exactly the same technique and size, which led us to link the two statues beyond doubt.”

Pantermalis said that, if confirmed, it would be the first time two statues of different gods have been located from a single temple in Greece. He said it was also possible that a statue of Athena, goddess of wisdom, could have stood in the temple of Zeus, and expressed hopes it might be discovered during future excavations.

Dion was a major religious center of the ancient Macedonians. Alexander the Great offered sacrifices there before launching his victorious campaign against the Persian Empire in the 4th century B.C.

Excavations so far have revealed temples, theaters and a stadium, city walls, a hotel, baths and streets with an elaborate drainage system, as well as many statues.

The area was first inhabited during the Iron Age, and survived into early Christian times when it was the seat of a bishop.

Pantermalis will present the find on Friday, during a three-day archaeological conference that opened in Thessaloniki Thursday.