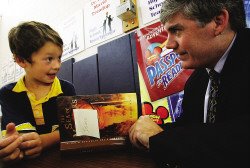 I just got back from a nice event in New Bedford, Massachusetts. I flew into Boston, my first time in the city . . . well, unless you count driving through it twenty-one years ago on our honeymoon. Boston is a beautiful city. The weather was warm and sunny, a nice change from blistering humid Texas. Wednesday afternoon I spoke to about a hundred and fifty kids at the Boys & Girls Club in New Bedford. Considering that I was an author, taking kids’ time away from basketball or baseball or hanging out in the computer lab, they were surprisingly well-behaved. They had good questions and they really knew their Greek mythology during the blue candy quiz. Thanks to Comcast and Toon Disney who provided each kid with a free signed copy of The Sea of Monsters and an ice cream party (I’ll let you guess which gift got the louder applause).

A nice article from the local paper, The Standard Times, is below.

NEW BEDFORD — Comcast and Toon Disney wanted to give the children at the Boys & Girls Club of New Bedford a “Passport To Reading.” But it was Rick Riordan who wanted to give them a passport to Greek mythology.

The award-winning author from San Antonio, Texas, read an excerpt from his novel, “The Sea of Monsters,” to about 150 children yesterday, helping to start the Comcast and Toon Disney-sponsored Passport to Reading program.

“The Sea of Monsters” is the second installment of a five-part series by Mr. Riordan about the fictional adventures of an adolescent boy named Percy Jackson. “This guy was good. I’ve never seen our kids that quiet for that long before,” joked Robert Mendes, executive director of the Boys & Girls Club. “They were really good when it came to the question-and-answer session. He was asking some tough questions, and they knew a lot about the Greek mythology.”

“I thought the author was really funny,” Kayla said. “I thought he was very funny when he did the voices of the old ladies,” Sarah said. “I’m very excited about the next book.”

To get youngsters charged up about books is what Comcast and Toon Disney intended the program to do. The start of school “is only a month away, so we wanted to get them reading outside of the classroom. They can take this with them,” said Becca Fracassa, community relations coordinator for Comcast.

Jessica Gioglio, Comcast’s public relations coordinator, said every child in the program will receive “a reading passport and will get a stamp after every book they read. After they’ve read 10 books, they’ll receive a certificate of achievement and a set of collectible bookmarks.” The Boys & Girls Club is one of five national stops that Toon Disney is making on its Passport to Reading tour.

For the past few years, Comcast has contributed to the Boys & Girls Club, which was responsible for bringing the program here.

“Two years ago, our volunteers painted most of the interior of the club,” Ms. Fracassa said. “We provide free cable and Internet to the club, and we recently donated 150 books as part of a New England-wide book donation drive.”

“We were just very honored that they’ve continued to support us,” Mr. Mendes said. Ms. Fracassa said the program might expand to other areas in the community.