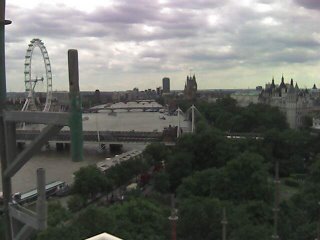 I just returned from the Sea of Monsters tour in the United Kingdom. Below are my blog journals from the trip.

June is an excellent time to escape the Texas heat, so I was thrilled to return to England for a week! I arrived midmorning, disoriented from the jet lag as usual, but it was a beautiful day. My luggage did not arrive with me. Is it just me, or does that happen a lot when traveling through the Chicago airport? At any rate, it gave me a reason to go shopping. I’m really not much of a clothes shopper (being male, and all) but I decided to go to Harrod’s, since I’d never been. It was worth the experience, though the exchange rate on currency is hardly favorable to Americans these days. All the prices are numerically the same as in the US, except in pounds rather than dollars, meaning everything is roughly twice as expensive. Ouch. A great time to visit America if you’re British, however.

I’m staying at Malmaison in Charterhouse Square – a terrific hotel, incidentally, if you ever need a good place to stay in London. It’s very near several tube stations, and the square is quiet at night. You almost wouldn’t know you are in central London.

Just arrived in Truro, Cornwall, at the very southwestern tip of England. My Puffin escort and I took the plane from London, which turned out to be much less expensive than the trains. I found that a bit strange. Ryanair is like the Southwest Airlines of Europe – cheap, no-frills, and a real experience. We got into Newquay (pronounced New-key), which I found out is the surf capital of England. Gnarly, dude. Or is it mate?

Speaking of language, I’d forgotten how often the English use the term ‘brilliant.’ Everything is brilliant rather than great. And cheers. Cheers substitutes for thanks, and goodbye, and ‘I know what you mean’ all rolled into one. Restrooms are more correctly called toilets (or loos). Fortunately, the English have no trouble understanding Americans – probably because they are inundated with American popular culture.

Cornwall is beautiful. Rolling hills and trees and beaches (we didn’t actually see the beaches, unfortunately, but I will take my hosts’ word for it). It was nice to smell clean sea air after a few days in London. We’re staying at Alverton Manor, which looks every bit like an English lord’s estate, suitable for an Agatha Christie murder.

We had a great event today at Richard Landers School with Year 7 kids (about 12-13 years old). My son was scandalized to learn that British school children are still in session, since he’s been out of school for three weeks already, but I found out that British kids have many more week-long holidays during the school year, so it works out to be the same. Everyone was apologizing for the weather today, since it was cool and rainy (this is supposed to be the nicest, sunniest time of year for Cornwall). I didn’t mind. It beats Texas heat. Apparently, the Cornish call wet weather “mizzle,” a combination of light rain and mist that doesn’t cause much actual rainfall, but makes everything wet.

This evening we had an event at the Ottakar’s store in Truro. It was a sell-out, with kids from three different schools attending. Bookseller Toni Davis and her friend Gem came in Roman dress. Thanks also to Jamie, another bookseller extraordinaire, for playing host and getting his reading group to come to the event. This store is really amazing!

Afterwards, we strolled around Truro and found some Indian food. You can’t very well go to England without eating Indian food at least once!

I even got a little work done today. I’ve finished sketching out the plot for the fourth Percy Jackson book. A little too early to say more, but I’m excited about starting the first draft.

A little drive through the English countryside today, up to Poole for a school event that went well, then on to Salisbury for dinner with some of the staff from Ottakar’s. Salisbury is definitely a town I’d like to visit again. It has a medieval central area surrounded by walls. The gates apparently close at nightfall. There’s a beautiful cathedral and plenty of other ancient buildings. We ate dinner at the Haunch of Venision, a magpie architecture two-story pub that must date from Shakespeare’s time. One of the big attractions in the pub is a severed, mummified hand that was found holding a deck of cards. The hand is in the pub and the cards went to a museum. Strange, but interesting. I had a great dinner with the folks from Ottakar’s. Everyone was a bit on edge about the impending buyout of the chain by Waterstone’s. Hopefully it works out for everyone. Ottakar’s is a great chain, and has been very enthusiastic about the Percy Jackson series. They do children’s bookselling especially well.

Back to London on the train this morning, jumped in a taxi and went straight to Putney for an event at Our Lady of Victories School. The kids were super. They asked great questions, and the school bought every student a copy of The Lightning Thief. Pretty amazing! I’m often asked how British students compare to American students. I was nervous the first time I did a school visit in the UK, back in the fall, but I quickly found out there isn’t much difference between students in either country. Kids are kids, really. The British kids do grin when I begin to speak and they hear my American accent, the same way American audiences do when they hear a British accent. After that, though, they respond about the same as American kids. Some questions do differ, however. Fewer British kids ask about the movie deal. They tend to ask, “How much money do you make” more than American kids do. I’m not sure why, but it is interesting.

Tonight, I attended a media event at the Puffin offices at 80 Strand. The tenth floor has this amazing view of London – Big Ben, the River Thames, pretty much everything. (See the photo I took above) I wanted to move in, it was so nice. Amanda Craig from the Times hosted a discussion with me and Paul Shipton, the author of The Pig Scrolls and The Pig Who Saved the World. Paul’s books are great fun, and he’s an excellent speaker. We had a super time with the booksellers, teachers and librarians who attended. Amanda asked wonderfully perceptive questions.

Off to St. Albans for an event at Wheatfields Junior School. Dawn Finch, the school librarian, is incredibly organized. I didn’t realize how rare it is for a primary school in England to have its own library. As many problems as we have in America funding libraries, it would be almost unthinkable for a US elementary school not to have a library. It seems a shame that what Dawn has created at Wheatfields must be such a notable exception, rather than the rule. Nat from BBC Radio 4’s Big Toe program came to do an interview with me and some of the kids. Hopefully I’ll get to hear it on their website.

Sarah Hughes, my British editor, was able to go with me to St. Albans. It’s always good to see her. Jennifer from Ottakar’s gave us a tour of historic St. Albans, including the cathedral and some other buildings that date from the 1400s. Afterwards, we had afternoon tea. (Like Indian food, this is something you have to do at least once when visiting England, right?)

In the evening, we did a public event at the St. Albans Library, where I was formally presented with the Red House Children’s Book Award. Woohoo! A great turnout. Many of the kids who had voted for the Red House came to say hello. I also got a lovely surprise when Jonathan Stroud, author of the Bartimaeus series, stopped by to introduce himself. I’m a great fan of his work, so it was a treat to meet him in person.

The last full day in England. We took the train to Coventry and then a taxi to Balsall Common, which is a very pretty village close by. Our event went well, although the real focus of the day was football! England plays another game in the World Cup tomorrow, and I could feel the tension and excitement in the air. I would compare it to Superbowl frenzy in the US, but even that doesn’t tell the story. The World Cup is a much bigger deal here. It plays in the national consciousness of England like no sport does in the US. I saw thousands and thousands of English flags all over the country, supporting the team. I don’t follow football (soccer) anymore than I follow American sports, but I couldn’t help getting a little caught up in the excitement. I caught the end of the Germany vs. Argentina game on TV tonight. Every time a goal was made, I could hear the crowds at the pubs down the street roaring with approval or disappointment, depending on who they supported.

Back to the States in the morning. Once again, a wonderful trip in England. I love visiting this country. I’ve been here six or seven times now, and every time I come over, it just makes me want to visit again!

Thanks to all the schools that hosted me, to Puffin Books for bringing me over, and especially to the fans of the Percy Jackson series who came to say hello at the events!